Just before crashing into a Calabasas hillside, the pilot of Kobe Bryant’s helicopter rapidly ascended to avoid a cloud layer, the National Transportation Safety Board said Monday.

Jennifer Homendy, an NTSB member, said the pilot flying from Orange County to Ventura County requested special visual flight rules, which allow pilots to fly under 1,000 feet. A marine layer had settled over the region Sunday morning and some areas were shrouded in fog.

Homendy said it remained unclear why the helicopter slammed into the hillside. Debris from the crash was scattered across 600 feet, she said.

“It was a pretty devastating accident scene,” she added. “There is an impact area on one of the hills and a piece of the tail is down the hill on the left side of the hill. The fuselage is on the other side of that hill. Then the main rotor is about hundred yards beyond that. The debris field is about 500 to 600 feet.” 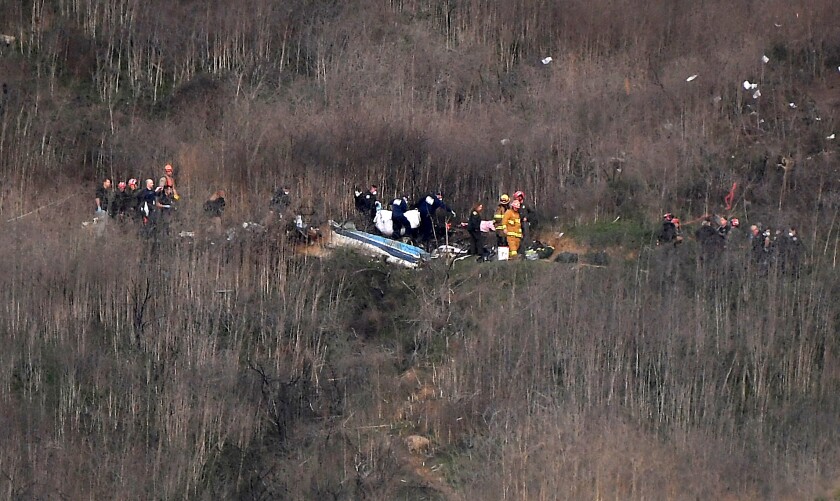 She said there was no black box and it isn’t required.

Firefighters responding to a 911 call at 9:47 a.m. Sunday found a debris field in steep terrain with a quarter-acre brush fire. Paramedics arriving by helicopter searched the area but found no survivors.

Bryant, who lived in Newport Beach and Los Angeles, was known to keep a chartered helicopter at Orange County’s John Wayne Airport.

The Times is offering coverage of Kobe Bryant’s death for free today. Please consider a subscription to support our journalism.

A Sikorsky S-76 chopper, built in 1991, departed John Wayne at 9:06 a.m. Sunday, according to publicly available flight records. The chopper passed over Boyle Heights, near Dodger Stadium, and circled over Glendale during the flight. The National Transportation Safety Board database shows no prior incidents or accidents for the mid-size helicopter.

Kurt Deetz, a former pilot for Island Express Helicopters, told The Times he flew Bryant from 2014 to 2016. Nine times out of 10, he said, Bryant flew in “Two Echo X-ray” — the Sikorsky S-76B, tail No. N72EX, that went down Sunday morning. Bryant favored the model, which is preferred by celebrities for its comfortable interior and solid safety record, Deetz said.

When Bryant retired from the NBA in 2016, he flew out of downtown Los Angeles in the same helicopter, wrapped in a gray-and-black paint scheme with his Mamba emblem on the side, Deetz said.

Deetz suspects the crash was most likely caused by bad weather rather than engine or mechanical issues. “The likelihood of a catastrophic twin-engine failure on that aircraft — it just doesn’t happen,” he said.

Parts of Southern California were enveloped in thick fog as the helicopter made its way from Orange County to Los Angeles. During the flight, the pilot noted he was flying under “special visual flight rules,” which allows a pilot to fly in weather conditions worse than those allowed for standard visual flight rules, according to radio communications between the air tower and the aircraft. At some point during the flight, the pilot apparently requested “flight following,” a process in which controllers are in regular contact with an aircraft and can help them navigate.

The tower is heard telling the pilot the chopper is too low for flight following before the conversation ends. There did not appear to be a distress call.

A visual flight rules flight “is based on the principle of see and avoid.” When operation of an aircraft under visual flight rules isn’t safe, often because of inclement weather, a pilot can opt to fly under instrument flight rules. During this type of flight, the pilot navigates only by reference to the instruments in the aircraft cockpit, according to the FAA.

“[Pilots] fly VFR when and if weather conditions allow, although they can choose to fly on an IFR flight plan at any time,” said Ian Gregor, a spokesman for the FAA. “Also, it’s always up to the pilot to make the decision whether to fly VFR and to ensure the safety of the flight and adherence to federal aviation regulations.”

Bryant was scheduled to coach Sunday in a game against the Fresno Lady Heat at his Mamba Sports Academy in Thousand Oaks and was en route there when the helicopter crashed. The tournament, called the Mamba Cup, featured boys’ and girls’ travel teams from fourth through eighth grades. Bryant’s daughter Gianna, who attended Harbor Day School in Newport Beach, was scheduled to play.

The Federal Aviation Administration and National Transportation Safety Board are investigating the crash. The FBI is also assisting in the probe, which is standard practice. The helicopter was registered to Fillmore-based Island Express Holding Corp., according to the California secretary of state’s business database. The helicopter’s manufacturer, Sikorsky, said in a statement Sunday that it was cooperating with the investigation.

The National Transportation Safety Board dispatched a “go team,” a squad of investigators that responds to major accidents across the country, on Sunday evening, said Christopher O’Neil, an agency spokesman. Leading the investigation is Jennifer Homendy, an NTSB member who oversaw the investigation of a fire aboard the dive boat Conception that killed 34 people off Santa Cruz Island in September.

“Our team will be looking at the history of the pilot … whatever crew was on board. We’ll be looking at maintenance records. At records of the owner and operator. And a number of other things as part of the investigation,” Homendy said.

On Monday morning, the L.A. County coroner’s special response team was working on a ridge above the crash site, continuing to remove the remains of the nine victims with the help of search-and-rescue team members. Investigators could be seen examining the tail rotor, while white-clad medical personnel worked around the bulk of the wreckage. The victims’ bodies are being taken to the Forensic Science Center of the coroner’s office. 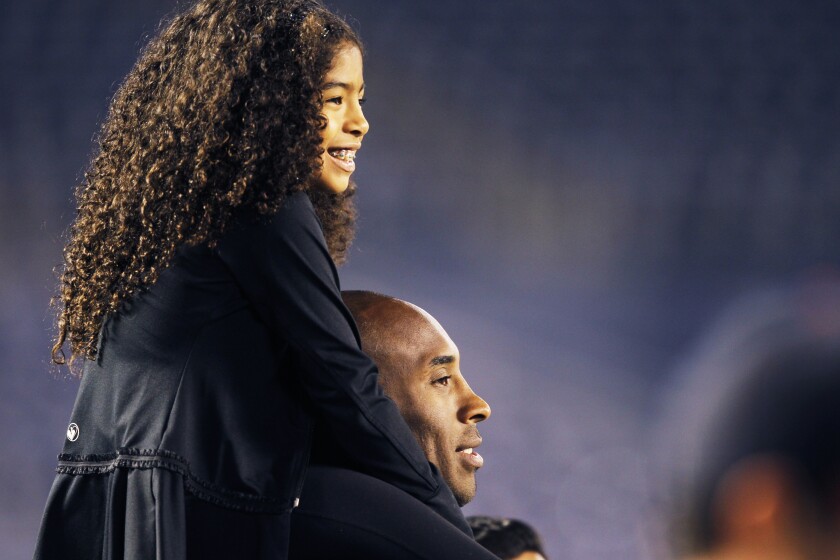 CALIFORNIA
Mothers, daughters, coaches: Here are the 9 killed in the Kobe Bryant helicopter crash
2 hours ago

The pilot, identified as Ara Zobayan, and eight passengers — including Bryant and his daughter — were killed. Orange Coast College baseball coach John Altobelli, 56, his wife, Keri, and their daughter Alyssa, who played on the same club team as Gianna, also were killed. Christina Mauser, who was the top assistant coach of the Mamba girls’ basketball team, as well as a mother and daughter from Orange County, identified by family and friends as Sarah and Payton Chester, also died in the crash.

Officials say the recovery effort at the crash site is expected to take days.

The investigation has meant some Calabasas businesses have had to close shop as sheriff’s deputies have blocked access to Las Virgenes Road. Many were turned away at a nearby office park that houses medical facilities and eateries.

Dentist Edmond Mgdesyan said he’d had three or four cancellations by 1 p.m., with a few other appointments looming.

“If my patients can’t get through, they’re just going to go home,” he said. “We’ve been told it’s going to be like this for a while.”

On top of the cancellations, Mgdesyan said deliveries weren’t arriving.

“We’re waiting for packages, for equipment and medicine that we need,” he said.

“None of my packages have been delivered,” said Barloski, who works for Calabasas Optometry. “These are deliveries of glasses that patients are waiting for.

“It feels like a ghost town here, which isn’t usually the case. It’s usually busy.”

Other businesses, such as La Paz Mexican Seafood and Symmetry Pilates and Yoga, either closed early Monday or never opened. 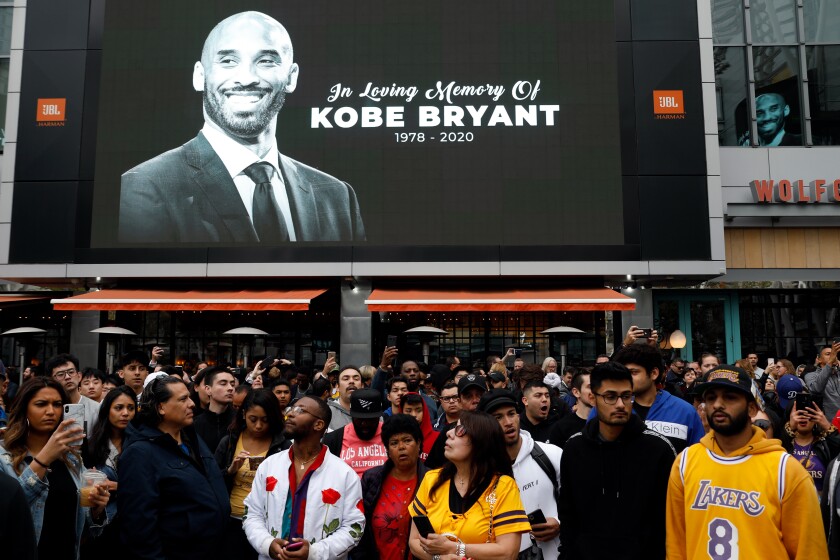 As officials work to find answers about what went wrong during the flight, Southern Californians continue to mourn Bryant’s death.

In Newport Beach, where Bryant lived with his family for years, two young girls dressed in purple and gold — Lakers colors — dropped flowers off at a bench outside Harbor Day School, adding to a makeshift memorial that has sprouted over the last day. The Bryant family was active at the private school, where two of his daughters had attended.

Maria Paun, 81, used her walker to deliver an assortment of pink flowers to the front of the school, depositing them on a bench. It was years ago, she said, that she sat with Bryant on a bench at the school when he was waiting to pick up one of his daughters and she was waiting for her granddaughter.

“He gave me a hug and he said, ‘I like your accent, Grandma,’ ” she said. “He was tall, and he was somebody and I’m nobody, but he bent down to give me a hug. And I never forget this hug.”

Paun said it was no accident that she wore a purple sweater Monday morning. She did so because “he liked the color.”

“It’s hard for me, and it’s hard for everyone,” she said, her voice cracking with emotion.

During a vigil Sunday night, Bryant’s fellow Newport Beach residents spoke of the athlete’s life outside of his storied NBA career. He was, first and foremost, a dedicated father whose love for his family was apparent to anyone who came across him, friends say. He was also the type of man whose fame never got in the way of his sharing a warm greeting at Starbucks or the grocery store.

Mario Nunes, 50, hung his Kobe Bryant jersey from one of the tables in front of the Pavilions grocery store on Newport Coast Drive, which Bryant was known to frequent, on Monday. Nunes, a job trainer with the Rehabilitation Institute of Southern California, said he used to see Bryant at the store every few weeks. Nunes was quick to whip out his phone to show some of the pictures he’d taken with Bryant over the years, including one he said was from shortly after the Lakers’ last championship in 2010.

Michael Young, 40, said he also saw Bryant periodically during the three years he’s worked as a courtesy clerk at the grocery store. When he heard the news about Bryant’s death, Young said his first reaction was tears.

Both Young and Nunes said the shock of seeing the superstar in the flesh never completely wore off, no matter how many times he came to the grocery store or made a run to the Starbucks in the same shopping complex.

“It’s like he’s still here,” Young said. “His spirit is all around us.”