What law did Donald Trump break? 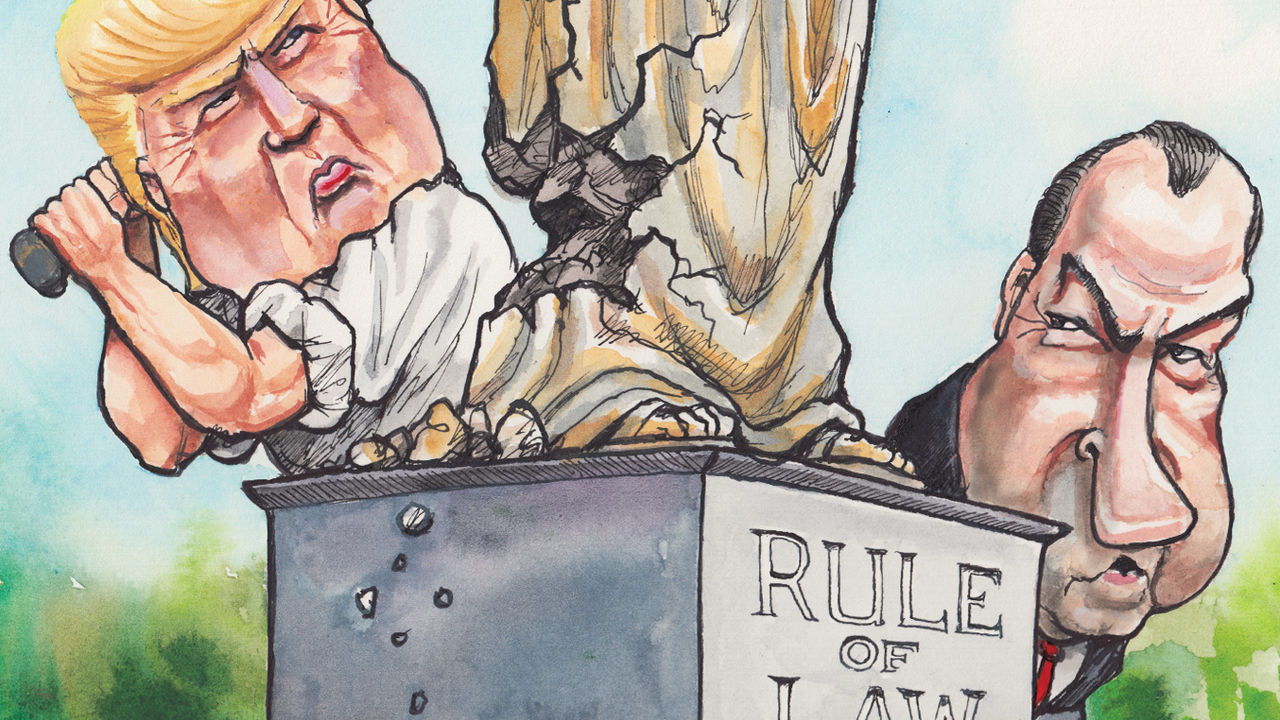 On the day House managers transmitted two articles of impeachment to the Senate, the Government Accountability Office, a nonpartisan public auditor, reported that President Trump violated the Impoundment Control Act by unilaterally withholding $214 million of legislatively appropriated Defense Department aid for Ukraine without obtaining authorization from Congress. “Faithful execution of the law does not permit the president to substitute his own policy priorities for those that Congress has enacted into law,” the Government Accountability Office concluded.

A violation of the Impoundment Control Act is not a minor technicality. At the height of the Watergate scandal in 1974, Congress passed the law to prevent a rogue president like Richard Nixon from withholding lawfully appropriated funds. A president who seeks to put a hold on such funds for policy purposes must transmit to both the House and Senate “a special message” specifying “the amount of budget authority which he proposes to be rescinded or which is to be so reserved” and “the reasons why the budget authority should be rescinded or is to be so reserved.”

Recent documents released through a Freedom of Information Act lawsuit by American Oversight and unredacted by Just Security disclose that the White House Office of Management and Budget had blocked the military aid under direct orders from the president and knowingly failed to file a report with Congress. Last August, Elaine McCusker, acting comptroller of the Defense Department, had asked Michael Duffey, associate director for national security programs with the Office of Management and Budget, “What is the status of the impoundment paperwork?” Duffey replied, “I am not tracking that. Is that something you are expecting?” McCusker said yes, but the paperwork never showed. Duffey said in an email that there was “clear direction” from the president “to continue to hold.”

Trump disputed the conclusion of the Government Accountability Office, saying that he acted lawfully under his authority to carry out American foreign policy. Rather than forthrightly putting his concerns in the legally required memo, Trump only mentioned after the fact that he was fighting corruption in Ukraine and getting European nations to contribute their fair share of aid. The evidence shows that both claims are pretextual.

The White House readout of his congratulatory call with president elect Volodymyr Zelensky of Ukraine last April said that Trump “expressed his commitment” to work with Zelensky to “root out corruption.” But despite the urging of his national security team, the call transcript shows that Trump never once raised the issue of Ukrainian corruption. In his second call to Zelensky in July, Trump again failed to mention corruption. Instead, in the context of discussing American military aid, he asked Zelensky to investigate political rival Joe Biden and the discredited propaganda line that it was Ukraine, not Russia, that interfered in the 2016 election.

Last May, the Defense Department certified that Ukraine had indeed met the anticorruption benchmarks needed to “support programs” and receive the military aid. Instead, Trump blocked this implementation and ordered no additional review of corruption in Ukraine. Indeed, Trump has shown no interest in fighting corruption in Ukraine or anywhere else. His recent budgets have proposed massive cuts in corruption aid to Ukraine and other nations. Congress rejected his plan to slash anticorruption aid to Ukraine by 57 percent down to $13 million. Trump fired Marie Yovanovitch, the American ambassador to Ukraine who focused on anticorruption, after his attorney Rudy Giuliani organized a smear campaign against her.

In September, Zelensky proposed new laws and a court system to fight corruption. Despite these anticorruption initiatives, Trump continued to hold the aid and released it only after House committees had learned of a whistleblower complaint that the administration tried to cover up. Those House committees announced the opening of investigations into the alleged pressure campaign by Trump and Giuliani in Ukraine.

European nations have not lagged behind the United States in funding aid to Ukraine. Europe and its financial institutions have documented some $16 billion in grants and loans to Ukraine since 2014, which well exceeds contributions by the United States. In his testimony, Gordon Sondland, American ambassador to the European Union, did not reference any approach to European nations about their assistance to Ukraine.

The plausible explanation for the illegal conduct of the president is that he wanted to keep his hold on the aid to Ukraine secret because it had lacked a legitimate policy justification. The Senate will now test at trial the House claim that Trump withheld the aid to pressure Ukraine into announcing investigations that would help him cheat in the 2020 election.

Allan Lichtman is an election forecaster and distinguished professor of history at American University. He is the author of the forthcoming book “Repeal the Second Amendment” and is on Twitter at @AllanLichtman.