Girl found dead in duffel bag had more than 100 scars on her body, coroner testifies 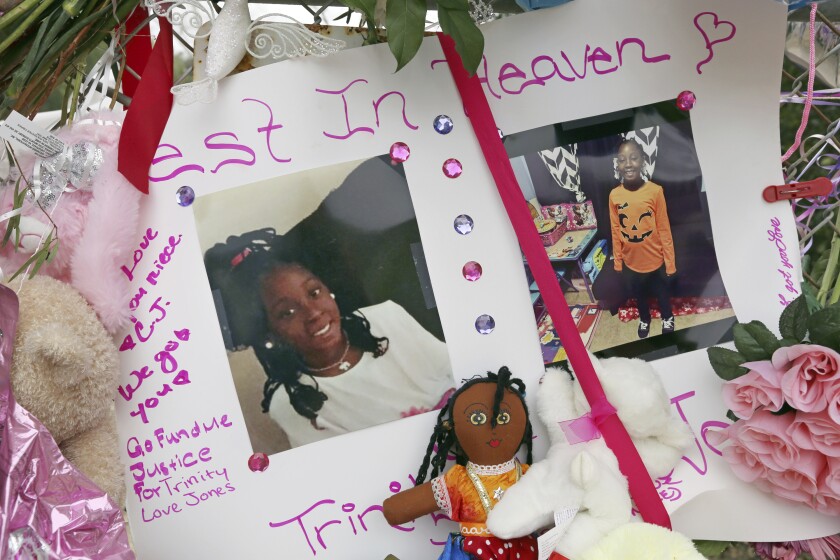 Trinity Love Jones was scarred from head to toe. There were so many injuries on the slain 9-year-old’s body that a medical examiner performing an autopsy had to draw several diagrams to document them all.

Evidence showed that the girl had been abused for months — beaten, denied food and bearing an infection on her feet that made it hard for her to wear shoes.

At a preliminary hearing this week in a Pomona courtroom, prosecutors outlined the serious injuries the girl suffered before her 2019 death and provided new details, including text messages and videos that led investigators to suspect the girl’s mother and her boyfriend of killing her.

Taquesta Graham, 29, and Emiel Hunt, 39, have each been charged with murder and torture. They have pleaded not guilty.

Superior Court Judge Mike Camacho decided on Friday that the case will proceed to trial, saying the evidence showed “systematic abuse and neglect.”

“It’s clear that these were intentional acts and the defendants acted with conscious disregard,” he said.

The girl’s body was found on March 5, partially stuffed inside a large duffel bag near the entrance to an equestrian trail in Hacienda Heights. The killing shocked the community, and the child’s identity wasn’t confirmed for nearly a week. Thousands of tips poured in from across the nation.

In court, investigators read aloud text messages in which Hunt and Graham wrote of punishing the girl and complained that she kept urinating on herself. “Trinity is going to get it,” Graham texted Hunt after one such incident.

A new crime drama from CBS weaves a tale that, sadly, has real-life antecedents, including the case of one Los Angeles man and his false confession.

In another exchange from January 2019, Graham asks Hunt to show Trinity the text she has sent: “We were talking about giving you a burrito … you messed up.”

In interviews with investigators, Hunt and Graham said that two weeks before her death, the girl fell and hit her head, Sheriff’s Det. Marc Boisvert testified. There was a large lump on her forehead and her left and right eyes had begun to swell. She became lethargic and started to slur her words, Graham said.

Graham told investigators that on Feb. 28, she woke up and noticed Trinity was congested, Boisvert testified. She said she gave the child Pedialyte, soup, a bagel and then took a shower. When she got out, she noticed that Trinity’s teeth were clenched and she was having a seizure, the detective said.

That afternoon, Graham went to work at a dollar store while Hunt waited in the parking lot. Trinity was in the backseat of the car, sleeping, Graham told investigators. When Graham got off work about 9:30 p.m., the trio returned to a hotel and Hunt carried the child back to the room.

Later that night, Graham checked on Trinity and noticed she wasn’t breathing. She told authorities her first thought was that Hunt had placed a pillow over Trinity’s face while they were in the SUV earlier that evening.

Hunt told investigators that he woke up about 3 a.m. on March 1 and noticed that the child was not breathing. He said he and Graham “freaked out” because of their criminal histories but told each other “we didn’t do anything wrong,” Boisvert said.

Court records show Hunt was convicted of felony child abuse in San Diego County in 2005 and sentenced to 12 years in state prison. Graham has a prior conviction for involvement with a minor in prostitution.

Graham said she wanted to call 911, but Hunt persuaded her not to and suggested putting the girl’s body in a dumpster, which angered her. She also said she didn’t take the child to the hospital after the fall because she was afraid of getting into trouble.

About 30 minutes later, video from cameras at a Walmart showed Hunt purchasing two shovels, a throw blanket and a lighter.

At 11:36 a.m., Hunt and Graham were spotted at a discount store purchasing a rollaway duffel bag that was identical to the one the girl was found in, Aguilera said.

Aguilera also testified that tracking data showed that Graham, who wore an ankle monitor because she was on parole, was in the area where her daughter was discovered for about 30 to 40 minutes on March 1.

After discovering the body, Los Angeles County investigators asked for the public’s help to identify her. A relative called authorities after seeing a sketch and photo of her. Investigators said that Graham, Hunt and Trinity moved out of a relative’s home in July 2018 and slept in Hunt’s SUV and at various hotels. Extended family said they had seen the girl only periodically after the move.

Investigators looked into Graham and Hunt’s criminal histories and began searching for them as possible suspects.

Graham was arrested on an unrelated warrant March 8 at a Border Patrol checkpoint in Texas. Hunt was arrested a day later after he was found sleeping in his SUV near San Diego International Airport.

Hunt told investigators that after the couple dumped the child’s body, they drove away from the site in silence, Boisvert testified.