Democratic nomination contestant Pete Buttigieg is joined on stage by her husband Chasten Buttigieg after a speech in Las Vegas in May 2019. 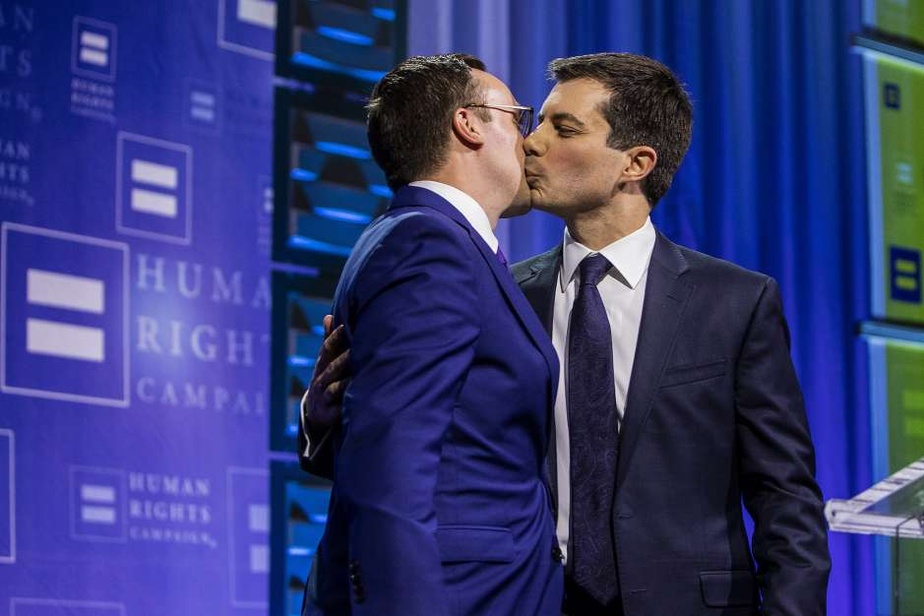 In a speech in Las Vegas on Saturday, the Democratic presidential candidate Pete Buttigieg described his decision to come out and how the exclusion he experienced made him conscious of what it means to belong and the need to overcome divisions.

But he also took a risk, warning his progressive audience at a gala for the Human Rights Campaign of the dangers to Democratic hopes posed by “so-called identity politics”.

The 37-year-old mayor of South Bend, Indiana, described “a crisis of belonging in this country” that he said was experienced by LGBTQ people, women, migrants, people of color, people with disabilities, workers and more. There was a need, he said, for “hopeful and audacious voices” to unite people in a changing time.

“What every gay person has in common with every excluded person of any kind is knowing what it’s like to see a wall between you and the rest of the world and wonder what it’s like on the other side,” he said.

But Buttigieg also said he was “not talking about pretending there are equivalencies between the different patterns of exclusion in this country”.

“When an auto worker, 12 years into their career, is no longer sure how to provide for their family, they’re not part of the country we think of ourselves as all living in together. That’s why we can’t seem to get on the same page.”

Buttigieg runs a post-industrial city in a Republican heartland, Indiana being one of a number of midwestern and northern states which Donald Trump won in 2016 with a successful appeal to blue-collar voters dissatisfied after eight years under a Democratic White House.

The mayor also criticised the Trump administration. It had, he said, “mastered the practice of the most divisive form of such politics, which is white identity politics, designed to drive apart people with common interests”.

Citing Trump’s chief domestic policy promise, he said: “What I worry about is not the president’s fantasy wall on the Mexican border that’s not going to get built anyway. What I worry about are the very real walls that we are putting up between us as we get divided and carved up.”

“Mayor Pete” was making his second campaign swing through Nevada, which will be the third state to cast votes for the Democratic presidential nomination next year. Despite having held only one public office, leading a community of about 100,000 people, Buttigieg’s name recognition and popularity have surged.

“I’d be lying if I didn’t admit that we’re a little surprised too at the speed of this trajectory,” he said.

This week, Trump mocked Buttigieg at a rally and likened him to Mad magazine mascot Alfred E Neuman in an interview with Politico. On Saturday night, Buttigieg said that if someone had told his teenaged self that that in 2019 he would wake up to reports “that the president of the United States was apparently trying to get his attention, he would have wondered what you were talking about.

“Let alone if you told him that the president somehow pronounced his name right.”

Buttigieg is a white, male graduate of Harvard and Oxford but he could become the first openly gay presidential nominee from a major party. He is competing in a crowded and diverse Democratic field that includes former vice-president Joe Biden, who is leading the pack and drawing heavily on his connections to former president Barack Obama.

Buttigieg appeared to hint at Biden’s allusions to the Obama administration when he said the US cannot and will not move backwards.

The former naval intelligence officer also described his decision while serving as mayor and preparing to deploy to Afghanistan to publicly come out as gay.

“I was seized with the awareness that I could be killed in action at the age of 33, a grown man and an elected official, with no idea what it was like to be in love,” he said. “I knew that I had to be who I am.”

He noted that the op-ed article he published where he announced he was gay came when the vice-president, Mike Pence, was Indiana governor, a fact that drew boos from the crowd.

The audience of about 750 gave Buttigieg two standing ovations, including when his husband, Chasten, joined him and they embraced at the end of his speech.

Before Buttigieg appeared on the stage at Caesars Palace, he met with members of Nevada’s Asian American Pacific Islander Democratic Caucus.