“Taking Calc 151 with only Asians in the classroom … I hope I don’t catch coronavirus … thinkin about dropping this class now,” a student wrote on his Snapchat story. A doctor in Ontario said her son was cornered at school by children who wanted to “test” him for the virus just because he is half-Chinese.

The new coronavirus, which can cause respiratory illness and pneumonia, has infected at least 17,348 people worldwide, killing at least 362 of them as of Sunday night, with only one death outside China. Eleven cases have been confirmed in the United States, including six in California.

False health information including warnings to avoid Asian food and Asian-populated areas has circulated, and videos of Asian people eating bats accompanied by inaccurate speculation about the cause of the virus and dehumanizing comments have gone viral. A barrage of vicious discussion and derogatory jokes about Chinese people or Asians in general have gathered steam online, drawing on age-old racist tropes associating Chinese people with disease, filth and dirty food, experts say.

Some in California felt their fears of racism around the virus were confirmed last week when UC Berkeley’s health services center listed xenophobia toward Asian people as a “normal reaction” in an informational post on Instagram focused on “managing fears and anxiety” about the pneumonia-like sickness.

The campus received a flood of criticism for the post.

“Feeling good about the light fear people have had of me in public all week,” campus alum Michelle Lee wrote sarcastically in a tweet.

The post was “blatant and awful” in its harm to people of color, and remarkable considering more than 40% of last year’s freshman class was Asian, said Angie Chen, legislative aide for a Berkeley City Council member and recent alum of the university.

“People can feel nervous, that’s valid,” she said. “But grouping in xenophobia with all the other things, like anxiety and helplessness, legitimizes these responses to the virus.”

this just in from the number one public university in the world: it’s okay to be xenophobic as long as you also feel sort of guilty about it

Amid backlash, the university deleted the post and apologized. “We regret any misunderstanding it may have caused and have updated the language in our materials,” read a statement shared by the Tang Center on Friday.

Aida Zhu, 21, who was about to board a flight back home to San Diego, saw an agent with the Transportation Security Administration staring at her as she shuffled through security at William P. Hobby Airport in Houston while wearing a mask.

“I hope you’re not ill,” he said to her in a disgusted tone. 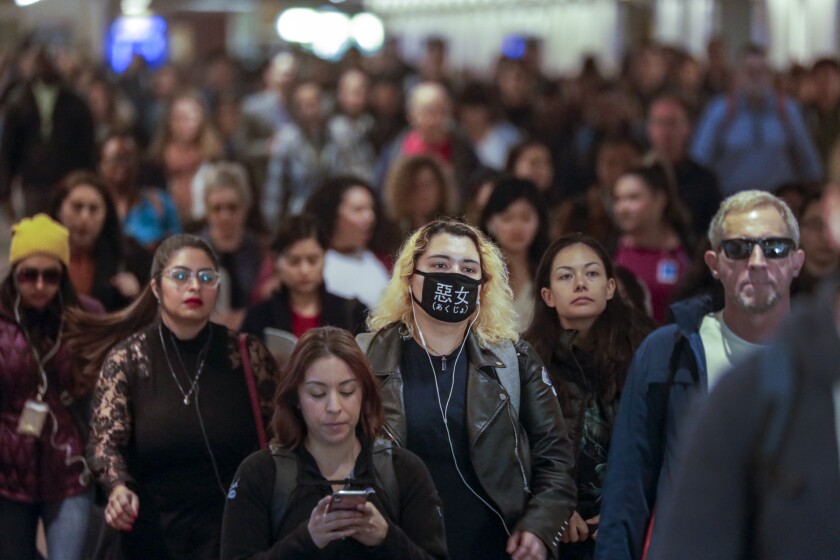 Zhu said she’s been mulling over the incident all week. She thinks racist sentiment has been latent. “The coronavirus is bringing it to the surface.”

Andrew Nguyen, 22, an employee at Aape, a retail clothing store in West Hollywood, was ringing a customer up last week when the man gave him a dirty look. Nguyen reached into the bag to scan the tag on the mask the man was purchasing — the type of face mask meant to be fashionable, not a medical one — his fingers brushing the cloth.

The man brusquely said, “Can you get me a new one?”

“Why?” Nguyen shot back.

“Because you touched it,” the man responded.

It happened when videos of Asian people eating exotic meats were going around, Nguyen said. “I felt like maybe he had seen one of those.”

Reading the vitriolic comments on news articles about the virus has taken a toll on 26-year-old Katherine Lu. She’s not worried about experiencing racism in person, however, since she lives in Los Angeles and rarely takes public transit.

“If I lived in a metropolitan area where trains were essential to my day-to-day life, I would worry that people were worried about sharing the same airspace as me, just based on my face,” she said. “The coronavirus is an opportunity for them to safely express their racist thoughts in a way that can be excused.”

On Friday, the Centers for Disease Control and Prevention advised people not to panic about the coronavirus and against stereotyping people.

“Do not assume that if someone is of Asian descent, they have coronavirus,” said Dr. Nancy Messonnier, director of the CDC’s National Center for Immunization and Respiratory Diseases.

But many have panicked; calls for self-imposed or community-imposed sanctions that are not based on official medical advisory have erupted.

“Close UCSB temporarily before one of us dies from the coronavirus,” one student posted, linking to a petition on Change.org, on an informal Facebook page where UC Santa Barbara students sell used items. “We have a large number of commuters from China and other people visiting China that have the potential to infect everyone.”

After receiving critical comments, the post was edited to read “this is not directed towards any particular group of people,” and later deleted. The Change.org petition was still online as of Sunday, and has garnered more than 1,100 signatures.

Huynh said one of her professors went on a spiel about the virus — unrelated to the subject he teaches — at the beginning of class last week. He asked that students who had recently traveled to China refrain from attending class for a few weeks. His comments made her feel alienated, she said, as one of the few Asian people in the class.

When she tweeted about the incident, writing, “sir your xenophobia is showing,” she was slammed by a steady stream of racist replies.

“Your home nation’s garbage quality of life is a product of your own people’s negligence,” one user tweeted at her, using a racial slur and other vulgar language.

Where practical concerns about infection end and where fear, misinformation and xenophobia begin is not always clear, but medical experts have pointed out that the coronavirus should not be top of mind for people in the U.S. So far, 11 people in the United States have been diagnosed with the coronavirus. None have died. By contrast, the flu has killed roughly 10,000 Americans since October.

“The racialization of coronavirus as this exotic foreign threat has a lot to do with the hysterical response in the West,” Mark Tseng-Putterman, a graduate student in American studies at Brown University, said in an email.

The U.S. decided to break the quarantine on Wuhan and evacuate its diplomatic personnel, “but you’re not going to have people wondering if the white people on the subway or in the store are diplomats who could be spreading the infection,” he said.

Geopolitical tensions and U.S. political strategy that sees China as, in the words of Secretary of State Michael R. Pompeo, the “central threat” facing the U.S. may also be fueling some of the xenophobia. This is clear in conspiracy theories that have circulated, such as those claiming that photos of heavy machinery clearing land for emergency quarantine hospitals in Wuhan were actually digging mass graves or those that claim the Chinese Communist Party itself created the virus, Tseng-Putterman said.

“That these cynical rumors are being spread while lives have been lost, millions of Chinese families have had their Spring Festival disrupted, and countless medical workers are putting their lives on the line to contain the virus is quite disappointing,” he said.

As airlines cancel flights to China and the U.S. issues a “do not travel” advisory, and China takes its own dramatic measures — quarantining more than 50 million people — anti-Chinese sentiment has reverberated globally. Hundreds of thousands in South Korea and Malaysia signed petitions asking that Chinese nationals be banned from entering their countries. In Vietnam, restaurants put up signs declaring “No Chinese.”

Stigma around Chinese people driven by fear of the coronavirus is reminiscent of discrimination that occurred during the outbreak of severe acute respiratory syndrome, or SARS, which peaked in 2003 and killed nearly 800.

Discrimination draws on this idea “that is very, very old indeed — that Chinese people as a race, no matter where they are, are disease carriers,” said Erika Lee, professor of history and Asian American studies at the University of Minnesota.

“Yellow peril,” the strain of thought that maintained all things Asia were a great threat to the white world, can be traced back to Europe in the 19th century. The idea took a particularly violent and effective turn in the U.S., where policies were often created based on the idea that Asian people were disease-ridden, Lee said.

Chinese migrants were subject to invasive and often humiliating medical inspections upon arriving at Angel Island that Europeans arriving through Ellis Island weren’t. When the bubonic plague hit San Francisco at the beginning of the 20th century, Chinatown was forcibly quarantined. Residents, considered unclean, couldn’t go to work, and went hungry, as it was difficult to find food.

For example, one of the earliest names for HIV was “gay-related immune deficiency,” and homophobic stigma around the disease led to the criminalization of living with HIV, perpetuated health vulnerabilities and helped fuel the epidemic. In the early 1930s, Los Angeles County and California public health officials submitted a resolution to Congress recommending a mass deportation of Filipinos. They argued that high rates of tuberculosis among Filipinos overburdened public health infrastructure.

“Treat people who exhibit symptoms rather than targeting people for quarantine or barring them from public places simply because of the way that they look,” said Lee, the University of Minnesota professor. “It’s really about using common sense and not letting fear and panic drive us to revert back to more base fear of foreigners.”