The narrow vote came after Republican senators said they did not need to hear more evidence, and pressed toward acquitting President Trump next week.

In a nearly party-line vote after a bitter debate, Democrats failed to win support from the four Republicans they needed. With Mr. Trump’s acquittal virtually certain, the president’s allies rallied to his defense, though some conceded he was guilty of the central allegations against him.

The Democrats’ push for more witnesses and documents failed 49 to 51, with only two Republicans, Mitt Romney of Utah and Susan Collins of Maine, joining Democrats in favor. A vote on the verdict is planned for Wednesday.

As they approached the final stage of the third presidential impeachment proceeding in United States history, Democrats condemned the witness vote and said it would render Mr. Trump’s trial illegitimate and his acquittal meaningless.

“America will remember this day, unfortunately, where the Senate did not live up to its responsibilities, when the Senate turned away from truth and went along with a sham trial,” said Senator Chuck Schumer of New York, the Democratic leader. “If the president is acquitted, with no witnesses, no documents, the acquittal will have no value because Americans will know that this trial was not a real trial.”

Even as they prepared to vote against removing him, several Republicans challenged Mr. Trump’s repeated assertions that he had done nothing wrong, saying they believed he had committed the main offense of which he was accused: withholding nearly $400 million in military aid to pressure Ukraine to investigate former Vice President Joseph R. Biden Jr. and other Democrats.

Still, those Republicans said, they were unwilling to remove a president fewer than 10 months before he is to face voters.

“If you are persuaded that he did it, why do you need more witnesses?” said Senator Lamar Alexander, Republican of Tennessee, a critical swing vote on the issue whose late decision to oppose considering new evidence all but sealed Mr. Trump’s swift acquittal. “The country is not going to accept being told that they can’t elect the president they want to elect in the week the election starts by a majority for a merely inappropriate telephone call or action.”

The vote signaled the end of a saga that has consumed Washington and threatened Mr. Trump’s hold on the presidency for the past five months, since the emergence in September of an anonymous whistle-blower complaint accusing him of using the levers of government to push Ukraine to interfere on his behalf in the 2020 election.

Senators recessed the trial for the weekend and will return Monday for closing arguments, with a vote on the verdict on Wednesday.

The timetable will rob Mr. Trump of the opportunity to use his State of the Union address scheduled for Tuesday night to boast about his acquittal, a prospect he has relished for several weeks. Instead, he will become the second president to deliver the speech during his own impeachment trial.

The senators adopted the plan by a partisan vote on Friday night, but only after Democrats tried once last time to subpoena four administration officials, including the former national security adviser John R. Bolton, and a collection of documents relevant to the case.

At the White House, Mr. Trump raged against a process he has dismissed from the start as a “witch hunt” and a “hoax,” preparing to make Democratic attempts to remove him a centerpiece of his re-election campaign.

“No matter what you give to the Democrats, in the end, they will NEVER be satisfied,” the president wrote on Twitter. “In the House, they gave us NOTHING!”

The outcome of the final vote was not in doubt. It would take a two-thirds majority — 67 senators — to convict Mr. Trump and remove him from office.

The president has insisted that he did nothing wrong, calling a July telephone conversation in which he asked the president of Ukraine to investigate his political rivals “perfect” and the impeachment inquiry a “sham.” For months, he has demanded that his allies deliver nothing less than an absolute defense of his actions. But while they were poised to acquit him, several Republicans offered words of criticism, instead.

Senator Rob Portman, Republican of Ohio, said that “some of the president’s actions in this case — including asking a foreign country to investigate a potential political opponent and the delay of aid to Ukraine — were wrong and inappropriate.”

Senator Marco Rubio of Florida, who challenged Mr. Trump for the Republican nomination in 2016, suggested that he did not necessarily consider the president innocent, either.

“Just because actions meet a standard of impeachment does not mean it is in the best interest of the country to remove a president from office,” he said. “I will not vote to remove the president because doing so would inflict extraordinary and potentially irreparable damage to our already divided nation.”

Not every Republican senator thought Mr. Trump acted improperly. “For three-plus years, Democrats have been trying to parse every one of his words, add their traditional view and find themselves often perplexed,” said Senator Kevin Cramer, Republican of North Dakota. “Part of the problem is that most of America likes the straight talk and occasionally forgives if he doesn’t say exactly the right thing.

Reflecting the depth of the country’s divisions, both sides were already looking past the trial to begin framing the fight over Mr. Trump’s conduct ahead of the November election. The first voting of the season is Monday in Iowa.

With the threat of conviction removed, Mr. Trump enters the election season as the first impeached president in modern history to face voters. But his expected acquittal is also likely to leave the president emboldened. He will argue that Democrats, unelected bureaucrats and the mainstream news media have targeted him because of their disdain for his supporters, and that his fight for political survival is theirs as well.

Democrats, too, planned to capitalize on the impeachment fight by urging voters to punish Republicans for refusing to demand a more thorough trial and for sticking with Mr. Trump despite evidence of his misdeeds. But they faced the risks of a potential backlash.

After resisting impeachment for months, Speaker Nancy Pelosi embraced it amid revelations of Mr. Trump’s actions toward Ukraine last fall. In doing so, she calculated that her party could not fail to act against a president whose actions it saw as clearly outrageous. But she confronted what she knew to be an unmovable reality in the Senate, where Democrats were certain to fall far short of removing him.

Senate Republicans made a wager of their own that it was better to withstand the short-term criticisms rather than to allow the proceeding to stretch on and risking damaging revelations. In doing so, they are strapping their political fate to that of a polarizing president who enjoys unparalleled loyalty among conservative voters. 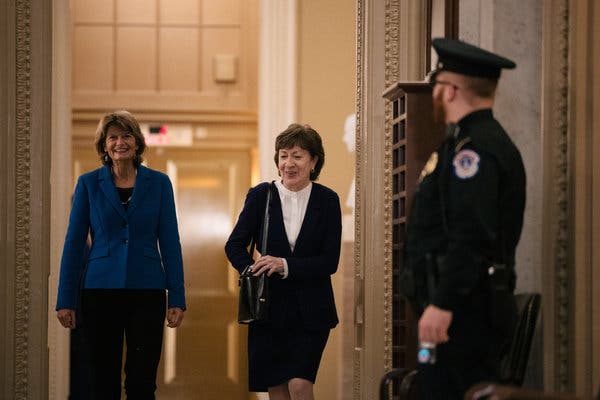 The Republican victory was sealed on Friday just moments after the debate was gaveled open and Senator Lisa Murkowski, Republican of Alaska, issued a statement saying that a vote for additional witnesses would only extend what she called a “partisan” impeachment. Still, she lamented that the Senate trial had not been fair and that Congress had failed its obligation to the country.

Ms. Murkowski did not indicate how she would vote on the final articles of impeachment, which she denounced as “rushed and flawed.” But she offered an unusually sharp rebuke of the institution in which she serves, appearing to cast blame on both parties and both chambers of Congress for letting excessive partisanship overtake a solemn responsibility. 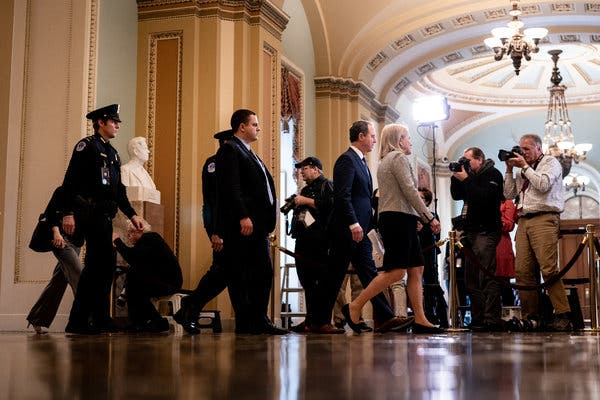 “Given the partisan nature of this impeachment from the very beginning and throughout, I have come to the conclusion that there will be no fair trial in the Senate,” she said. “I don’t believe the continuation of this process will change anything.”

“It is sad for me to admit that, as an institution, the Congress has failed,” Ms. Murkowski added

Speaking from the well of the Senate before the vote, the Democratic House managers made a final, urgent appeal for additional witnesses during a two-hour presentation on Friday. They warned senators that a refusal to hear new evidence would ensure that Mr. Trump would never be held accountable and would undermine the nation’s democratic order and the public’s faith in the institutions of government.

Representative Adam B. Schiff of California, the lead House manager, seized on a New York Times report published in the hours before the vote to hammer home his point. The article revealed that Mr. Trump had asked Mr. Bolton last May to assist in his pressure campaign on Ukraine.

“The facts will come out in all of their horror, they will come out,” Mr. Schiff said. “The witnesses the president is concealing will tell their stories,” he added. “And we will be asked why we didn’t want to hear that information when we had the chance. What answer shall we give if we do not pursue the truth now?” 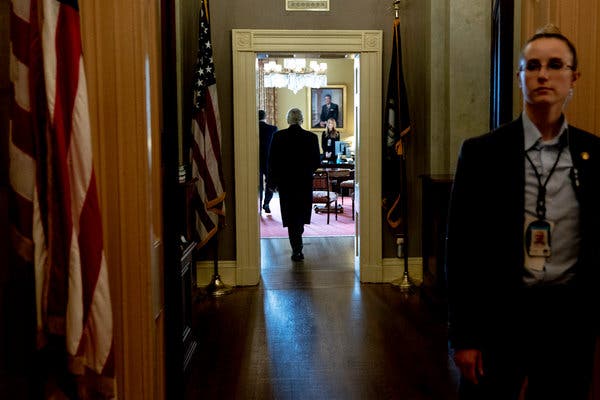 Mr. Trump’s defense team vigorously argued the opposite view, telling senators they had all the evidence they needed to dismiss the charges before them, and warning that calling new witnesses would set a dangerous precedent by validating a rushed and incomplete case presented by the House.